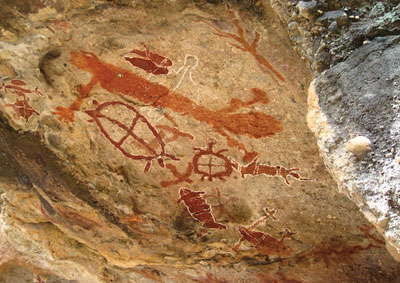 The story of Lizard Rock is similar to that of Tittalik. Yet the Lizard’s appetite was for food rather than water.

The Lizard ate everything he could see. He ate animals and people. He kept on eating and eating and growing bigger and bigger.

Then one day the Lizard ate a Kangaroo. The Kangaroo was not very happy about this and started to jump up and down inside the Lizard’s stomach. The Lizard soon began to feel ill, just like when someone has had too much to eat.

The Kangaroo kept on jumping and jumping, until he jumped right through the Lizard’s stomach. It was big enough for everyone and everything to jump out.

The Lizard suffered a similar fate to the Frog, and was turned into stone. He also remains in Wollombi to remind all of the fate of greed.