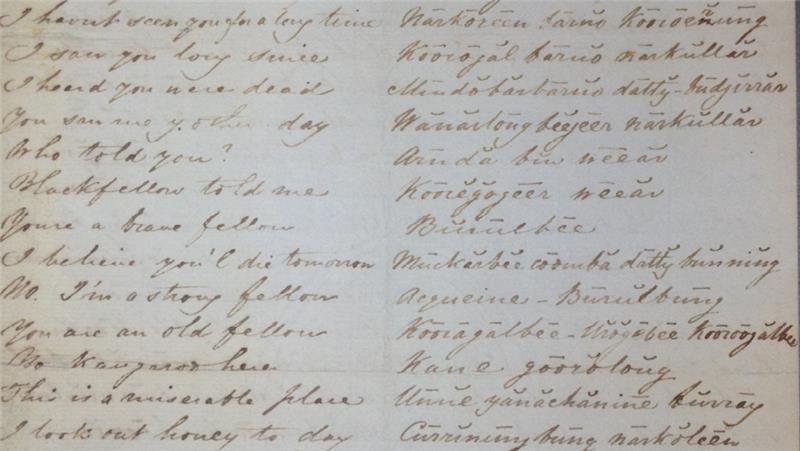 Who recorded the Awabakal language? And why is it important?

The word ‘Awabakal’ was first recorded in 1892 by John Fraser who reviewed Lancelot Threlkeld’swork and reprinted some of it in ‘Australian Language’. Unfortunately, no record from Threlkeld has been produced informing us of a name of the local people of Lake Macquarie. He was the Aboriginal Missionary from 1825 until 1845, and so this brings us to the issues of him recording the local language.

Issues with English speakers and Australian Aboriginal languages.
Traditional languages of Australia go under the banner of being an ‘Organic Language’, which means that nearly all the entire language is about the natural environment. There are words for stages of development in the living environment, different types of water, wind patterns, etc. English speakers will only understand a language like this from their own language perspective which dismisses the complexities and true depth of knowledge contained in these languages. There are specific consonants and sound variations that are unique to Australia as being a Southern Asian region, as well as being an isolated continent.

Awabakal sounds
There is much speculation and theories as to the sounds produced by the traditional people of the Awabakal region and from analysing Threlked’s work from 1825 until his last work being the Gospel Of Luke 2nd version. This is the sound confirmation so far:

The Awabakal language consists of 3 vowels;

This is standard for nearly all Aboriginal Australian languages of the Pama-nyungan linguistic family. Threlkeld has issues with precision of these as the pronunciation can be skewed due to many factors eg, missing teeth of the speaker, the speaker being multi-lingual, hearing issues prevalent for Aboriginal people etc. A good example of this is Threlkeld recording:
Hut =Kokere
But if we look back to his earliest recording in 1825 he records:
Hut = Coo-kar-ee
So we now know that the word for a ‘hut’ is KUKARRI; the ‘rr’ being a trill.

Consonants
Australian Aboriginal languages are oral, they have never been a written language traditionally, which has caused some confusion around the way these languages should sound. For example, some languages will use the letter ‘k’ or ‘g’, while in fact they are the exact same sound. The same goes for ‘t’ or ‘d’, and ‘p’ or ‘b’. The letter ‘j’ is another major issue, which can be shown to be represented as ‘ty’, ‘dy, ‘tj’, ‘tch’ and ‘dj’, which again, are all the same sound. Another group of sounds people can find difficult is the use of ‘retroflex’ consonants. These sounds are an accentuation of the tongue moving from the roof of the mouth and flicking forward. From our research we can confirm the list of consonants below:

As you can see, he records “waddie” (club) as GOODJERRA, in 1834 he records this word as “Kotir-a”. Another way Threlkeld wrote this word was “Kotara”. From this we can conclude that the word is KUJARRA.

To trill or not to trill
English literacy in the 1800’s can be tricky to decipher as the decade in that span can affect the way they are pronounce words. The letter “r” in Threlkeld’s first 1825 records have the single ‘r’ as a rhotic and a double ‘rr’ as a trill. For some reason he changes this rule around to be the opposite in his first published works. Later on in his life his last couple of works have the rule reversed again to be how we know it in English today, the ‘r’ being a rhotic and ‘rr’ being a trill. This has been confirmed with audios of traditional speakers from neighbouring languages.
E.g. The Gathang language has the exact same word for ‘fish’ = Makurr. Which Threlkeld recorded as ‘Makoro’. We know now this to be MAKURRU.

Retroflexes RL, RN and RT
RL is recorded in 1825 from the word BAR-LE.

We know this to be a rhotic, as his other words listed have ‘ah’ instead of ‘ar’. As in the word below: Ah-no-ah.
From this evidence collected with analysing his works and from comparing to neighbouring languages, we know the word for the dual inclusive pronoun is BARLI

RN, is recorded in1825 from the word for who – NARHN or GNARN

RT, is recorded in1825 from the word for water - PARTO

In December 1839 the American Expedition, Horatio Hale gave more information for this sound. He explains PATRU – TR one sound, r not trilled. From this we can conclude that the Awabakal word for water is BARTU

Conclusion.The language work status is still pending, but there is hope. There is close analysis being done on Austronesian languages of South-East Asia, the Pacific, and various practiced Pama-nyungan languages. This work along with various other language professionals with audios of NSW Aboriginal languages, is making great strides in development to revive one of the first Australian Aboriginal languages not being practiced in a very long time.